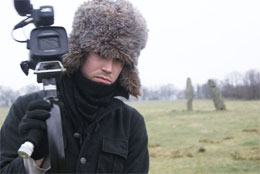 Ethan Race began experimenting with video when he was aged 14 and his first short film Conflict won the BBC Blast Future Film Awards leading it to be premiered at the BFI and screened on BBC2. 5 short films later and with another T.V director’s credit, he produced Temple Wood completely independently which, at 60 minutes in length, marks his first feature length film. It was filmed over the period of a year during which he traveled around the Scottish highlands in a camper van with minimal crew and equipment, filming and improvising scenes at various historic sites in the Scottish Highlands.

Temple Wood is the result of a 7 year search for a creative method of film making which can truthfully express the nature of the mind. Drawing inspiration from David Lynch’s Inland Empire, where, in refusing to scrutinize his ideas with logic Lynch chose rather to construct the film based on a belief that ‘because all things are unified, this idea over here would somehow relate to that idea over there’, I set off for the Highlands to shoot the film with nothing but a loose script and a set of constantly evolving ideas. The result, I hope, is an organic expression of the mind’s undying will to be free from the repression that controls it through fear.